I was told my Spirituality confuses some that try to read my writings...
...so this is something to skip over if you're not interested in my Sacred Beliefs. No harm done. I don't mind if you keep scrolling. It's early in the week for this kind of stuff, isn't it? And if you know me, you know I'm "out there," so it's bound to be weird. I don't blame you for moving on to the next blog.
I am glad we're friends.

So here's a Concept or Two I hold as Truth, explained more plainly: 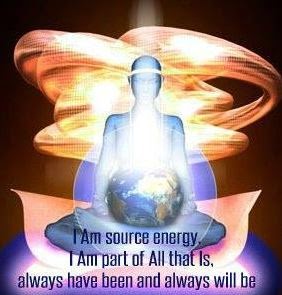 Better yet, use a different word, one less emotionally charged with a lifetime of others telling you what such a being feels and thinks. How about: a Divine Creator, a piece of the Infinite. SOURCE of EVERYTHING. Or (my fave) The Universe.

From the highest perspective, this BEING we discuss views you as a piece of that which that being is made from. It sees you as a very real extension of itself, as you view your hand or your smile. Do you view your thumb as different from "you," no? Silly question? So your Creator sees you, your life and your very complex being as well.

Aside from being a part of that Source, this being does recognize you may feel separate from it (or him/her) and live your life unaware of your true identity. From your Creator's view, in the best way, the Creator sees that part of you that feels "different" as holding the same value of itself:
Absolute Equals.

Yes, God sees you and him as both being worthy of the same esteem, love and appreciation. Personally, I'd argue that this being actually holds others in higher levels of such than we're usually able to express, but from the Prime Creator's view, we're all on the same footing. All worthy beings deserving of being cherished every day of our lives.

In fact, this being (that is the bigger part of YOU) sees all other beings as equals, from the tallest and oldest tree to the smallest and stinkiest bug: all are exquisitely divine. All are equal to each other. Nothing is more than any other, no being is less than any other, from physical beings to angels to devas (what some call gods and goddesses)...
...all have the same worthiness, in that they are as worthy as that which we call God.

Such a powerful sense of Equality is one to be recognized and emulated, in my personal opinion.

Humans were designed to eventually recognize what WE ARE. It's an old Wisdom that is steadily becoming prevalent now.
...which is to say, we're complex beyond words, but "infant Creators" is a related phrase.

When we do start to believe in our Divinity...

...the Universe created specifically for and by us starts to reveal itself. I have been on this path for years now, and eventually it proved itself to me completely. With this belief, I started feeling far more compassion for others, other life, the planet itself, all that is around me. After all, we're all parts of the same stuff. Hating or Judging you is quite literally me hating or judging myself.
And that seems unhealthy, doesn't it?

This Spiritual Truth of mine shapes my understanding of myself and others, and each day I feel like I'm getting a new understanding on what it is to be what I'm created to BE: a joyful, happy divine being filled with love and appreciation to my Creator, which is figuratively and literally "myself."

Sound crazy? Give it a thought of "it could be true" and see what else pops up in your life to help validate this sacred concept...

...and at the very least, I hope I explained myself a bit more clearly than I have in the past when I've avoided fully sharing details about my own Spiritual Path. If you made it all the way to the end, then know I love you very much for your valuable attention, no matter what you felt about this information. I'm just happy you exist on your own path, different from mine, but you took some of your valuable time and gave it to allowing me to express myself in this manner. Thank you for such a kind gift.

Facebook.com/Robert.Hughey
Posted by Robert Hughey at 8:47 AM