Years ago I published this to a blog I used to be much better at maintaining, one on Real UFO Sightings and related alien stuff... It is interesting food for thought, but the last sentence of the post makes me smile a bit.  I'd answer my own question with a nod and a "They would be us, and we would be them. We are that, too."

The three "laws of scientific progress and prediction"
as formulated by the British writer Arthur C. Clarke. 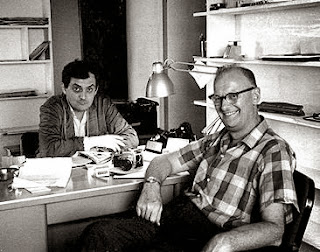 The Three Laws are:

Personally, I'd like to fully hit the point home for... well, really for myself and my own miraculous experiences and conclusions that may be a wild goose chase, brought on by Advanced Technology.


Advanced Alien Technology would be indistinguishable from perceived Divinity.

Truly, it could completely emulate that which a human being on Earth would easily call God.

So truly, advanced civilizations - millions of years beyond the technology level where we've been allowed to enjoy, what is the difference between them and the Divine?

Honest question and sincere question: to a human, would such advanced lifeforms truly be Gods - at least in comparison to us?

Posted by Robert Hughey at 6:50 PM