The Truth About God and You

Invictus
Out of the night that covers me,
Black as the Pit from pole to pole,
I thank whatever gods may be
For my unconquerable soul.

In the fell clutch of circumstance
I have not winced nor cried aloud.
Under the bludgeonings of chance
My head is bloody, but unbowed.

Beyond this place of wrath and tears
Looms but the Horror of the shade,
And yet the menace of the years
Finds, and shall find, me unafraid.

It matters not how strait the gate,
How charged with punishments the scroll.
I am the master of my fate:
I am the captain of my soul.
William Ernest Henley

Walk Your Truth, Define Your Reality, Claim Your Divinity

It is an amazing fact of reality: the human being is directly responsible for shaping/affecting the very fabric of space and the very essence of his so-called “reality” that he experiences. Some have called that simply the human's "perspective," but I can tell you that when a human being starts to allow even a possibility that he has the otherwise supernatural ability to shape his reality, that's when things start getting very, very interesting for him.

Speaking of interesting things for humanity, I have channeled some interesting concepts. I meditated with an supposed Arcturian frequency today, also particularly focused on our Sun, so perhaps these come from a mixture of those two concepts:

Before you were born, you planned your life out. Your actions and experiences are exactly what you chose.

That statement is literal, in a way, but it implies that you, as a human, sat down and planned it all out. That’s not exactly the case though, as that would be a lot for one man, wouldn't it? Nevertheless, your life is planned out and working out exactly as it should, for what is supposed to be is what happens in this Universe. That's a law impossible to break. I'll explain:

If something were not “meant to be,” then that would fall to the realms of non-existence: it wouldn't happen and therefore it doesn't happen. All that is in existence is only what is meant to exist, otherwise it wouldn't exist in the first place. Anything not meant to happen is in the place of non-existence, which by its very definition is neither full nor empty of absolutely "nothing."

So then one has to wonder, if it’s too much for one man to plan out, but it’s still a fact that I, myself, planned out this life – then what must I actually be to have such computational capacity and depth of 3D understanding? The realization that I am “more” than one man is unavoidable. Or maybe it’s more close to the Truth to say that I am becoming more and more aware that I’m more than “just” a man.

Of course, to be able to think such a thing, one has to really ask the question: “What is a Man?”  As that question alone could have such deep answers that lead all the way up to God Himself.

Is God Also a Man?

Dangerous Question?
No question is dangerous, though whether an answer could become dangerous is another issue entirely.
Perhaps God's Humanity is real from some perspectives and from my deep-seated belief in Him and the belief that He literally is here inside me, experiencing everything I experience right along with me.

Take the word "Human." Another way to break it down is to understand "Hu" is another name for God, for the Creator essence.

Well, that's something to meditate on, isn't it?
Speaking of which, I found this particular mediation/activation video extremely interesting today. The visuals, audio and premise really resonated with me, and I hope it does with you too.

I hope that is the case that this energy I feel in more core is what I communicate with and choose to call God. I know that what's inside me is truly inexaustable and infinite, and such responsibility that would come with having such an infinite Source would require, to my thinking currently, a "being" or "consciousness" outside of my dream (or my "reality") to ensure I do not self-destruct when accessing it.

I do invite God to innervate every cell, every molecule and every atom of my being. Or at least I have done so, and the more my own awareness pushes “inside” to that level, the more I become aware that God – quite literally – is the very essence of what makes up everything there - He literally is the parts of my very being.

The more a man pushes his awareness, expands his consciousness, elevates what he considers his understanding of the reality in which he finds himself, the more he finds God around him – and the more he starts to find God within Himself.

God and You are Cohabiting,
Co-creating Your Personal Cosmos

Even simply imagining that there is a possibility of a Self-Determined, Self-Governed, Self-Protecting and Self-Adoring reality to the Universe will allow such self-realization to start creeping in to the conscious awakened “reality.” 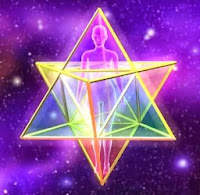 I invite you, whoever is reading this, to allow such a reality to be in your own realm of “the possible.” For when you do, the reality you live in begins to be magical and wonderful, and along the way you’ll start to realize it was already like that to begin with – you just hadn't been paying attention to it.

"Namaste, dear ones."
...which is a salutation that means so many things, my favorite being loosely translated to "I see the God within You."

Posted by Robert Hughey at 9:50 PM